Michele Spry
Columbia, Missouri, United States
Welcome to my blog! This is all about things important to me... family, friends & everything in between! So pull up a chair, slip off your boots and laugh a little at my simple little country life!

March 3, 2018 ~ For anyone that has followed my blog and followed the journey of writing my second children's book, A Trip To Remember, you might remember some incredible things we found out when researching Lt. Col. Ferrill A. Purdy. Three key pieces that will always have a piece of my heart, besides Mr. Purdy of course, was finding his wing man, Major John H. Tashjian and reuniting them, finding a plane they both flew during World War II in combat - Corsair F4U-1A # 17799 and the Planes of Fame Air Museum family. We found these people and things in 2016 and for the last nearly 2 years they will forever have an important place in my life. (Photo Credit for above photo goes to Jeff Burg with Grindstone Digital Imaging)

For the last two years I have had the honor and privilege of traveling to Chino, CA and being a small part of their Living History Event focusing on the Corsair F4U-1A #17799. During the entire year they will pick a war bird and focus on it for a month, have presentations with veterans, historians and pilots to give the audience an over view of that particular aircraft then fly it. The Living History Event for the Corsair had been in August for the past two years and this year they bumped it up to March 3, 2018. Sadly, I couldn't make the trip with several commitments going on around home. I was really bummed as I didn't want to miss out on this very special event. Planes of Fame Air Museum understood and then I received an e-mail from Harry "T" Geier, Director of Marketing and Development who suggested that maybe we can do a phone interview with Mr. Purdy during this event. I loved this idea and it would certainly bring a different spin on this presentation because they have never gotten the chance to hear Mr. Purdy speak! We talked a little more and decided to try Skype... this way everyone would be able to see him on the big screen they have at their events AND hear his voice!

A few days before the event we tested the Skype connection at Mr. and Mrs. Purdy's house, on their 64th Wedding Anniversary and everything checked out nicely. We were all really excited to be able to have Mr. Purdy a part of their Living History Event. The best part was Mr. Purdy was really excited to do this and just couldn't believe that technology would allow all of this to happen! 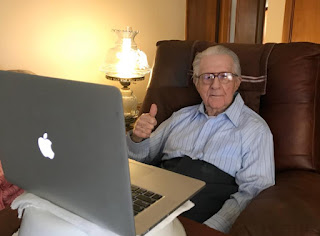 On the day of the event we were unable to test connections one last time. If you have ever been to one of Planes of Fame Air Museum's Living History Events you will know that the energy is high, volunteers, members of the community and beyond are checking out the various planes and waiting for this day to get started. (Plus it is 2 hours earlier than Missouri time) The event started and we were up but sadly we couldn't get Mr. Purdy on the big screen. A minor issue so we quickly turned to "Plan B" which was doing the phone interview just as we first discussed. I know it was nice for the 350-400 in attendance to hear his voice - the voice of the first known pilot to have flown their Corsair F4U-1A # 17799 but I really wish they could have seen him. We got done with the interview and Mr. Purdy was happy. He was so willing to help in any way possible. I visited them for a little longer and then headed home.

I received a private message from Lorrie Hermann, who was in attendance at the Planes of Fame Air Museum's Event and suggested that we try Facebook Live - What a brilliant idea! Why didn't I think of that... I mean seriously I had the technology literally in my hands!

I drove back over to Mr. and Mrs. Purdy's house and told them what I wanted to do so that everyone would be able to see Mr. Purdy and hear him respond to various questions I would ask him. It wouldn't be long but just something that would be kind of cool to share with others. He was on board and was ready when I was!

This was my first "Facebook Live" video and I apologize for not having my thoughts well thought out but hopefully it makes sense! Mr. and Mrs. Purdy watched it after we were done and he just laughed. At almost 96 years old all of this technology is crazy to wrap your mind around. I love sitting and listening to his stories and I will have to do this again sometime - pieces of history being captured for many years to come. He said the hardest part about getting older is that he is starting to forget a lot of the island names and that bothers him. I think he does pretty darn good and because I have had the pleasure of visiting 60+ schools in Mid-Missouri and tell his story then I can help with part of it - although we haven't talked a lot about his time on Tarawa.

I hope you enjoyed this video and I am so thankful that technology allowed Mr. Purdy to travel from his home (while sitting comfortably in his recliner) to California. Hug your veterans tight and thank them for their service often!
Posted by Michele Spry at 3/06/2018 09:34:00 AM